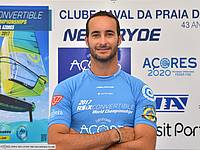 I began Windsurfing when i was 10 years old in New Caledonia when Bjorn Dunkerbeck led the last Noumea Cup PWA in 1995!! As i did a lot of Optimist, I started to race in Olympic Class (mistral) all around the world and i was 3 times French Youth Champion and alsoYouth european Champion. Now I m living in France and training at the "Pole France de Marseille" and I m in the National Olympic Team in Neil Pryde RSX. (3rd at the last National Championship) I just finished 16th of the last European Championship and I m qualified for the RSX World Championship for the 4th time.
Last year i also did the French FunBoard Tour AFF (Association Francaise de Funboard) and i finished 6th of the seconde stage with some good races in the Top 5.