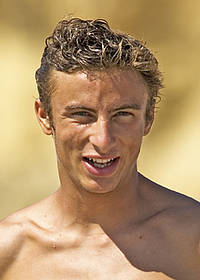 Coming from a sailing family (Boats), Yannick was introduced to Windsurfing by his mom at the age of 9 in St Laurent du Vars near his home town Nice (French Riviera).

In 1998, just after his 17th birthday, he took part in his first competition in the Portuguese local event ‘Guincho Wave Classic.’ He finished 1st place junior and 7th overall in strong side-shore winds. He began to train professionally and travelled throughout Europe and North Africa, searching for best wave conditions and participating in French events.

In 2001, thanks to the shaper Fabien Vollenweider and to ex world cup competitor Fabien Pendle, he signed up to his first full year as an athlete and entered PWA qualifier events. The following years were all about competing in the PWA, lots of travelling for surf trips, and doing the traditional competitor’s Hawaii photo shoot during the season break.

2004, 2005 and 2006 were marked by a return of the indoor events, Yannick’s skills and build suited these contest and he was regularly placed top 3 in the jumping discipline.
In January 2006, during the London Boat Show, he performed the first ever indoor double forward loop.

Following a second injury break, he spent some months mountain walking and camping in the Alps and decided to move to Fuerteventura to find some stability. He is presently living there, waveriding almost every day.