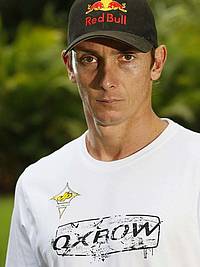 For over 20 years, Jason Polakow has attracted international acclaim as one of the world’s best wave sailors. In particular, Jason is renowned for his wave riding ability, which he is widely considered to be one of the best of all time.

Jason first rose to prominence in windsurfing establishing a whole new style and direction in wave-sailing that redefined the sport early in his career. This new style was largely facilitated by Jason’s trend setting departure from using traditional “asymmetric” board designs, to his own symmetrical “pintail” shapes. This ground breaking move paved the way to a whole new era in board design, which is still evident in the most contemporary shapes being produced today. As a result of this, Jason is recognised by many as the father of modern wave-sailing.

Jason is also one of the few competitors to have ever launched a successful board brand – the “JP Australia” brand - which, since its inception has been synonymous with the most technically advanced equipment and the highest quality of production through its association with the Polakow name

Jason is also a double World Champion having topped the PWA rankings not once, but twice during his career, a feat only accomplished by a very select few windsurfers in history.

Personal Achievements:
"I am proud to have reintroduced the pin-tail shape into windsurfing and to have established it as the modern standard in wave bard design. When I came to Maui everybody was using asymmetrical boards, which were considered the ultimate for wave sailing at the time, my style convinced them otherwise...
I’m proud to have established my own sailboard brand."