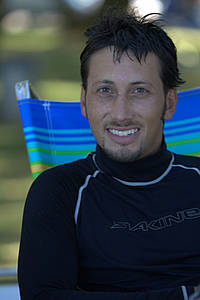 xBorn and raised in Wyoming, I took my first windsurfing lesson with my dad when I was fifteen. I moved from Wyoming to L.A. California to work for Captain Kirk's Windsurfing. From there I moved to Hood River, Oregon, to improve my windsurfing and to work for Ezzy. The next winter I started to work for David Ezzy in the sail loft on Maui. For the past 7 years I've been spending my winters in Maui and summers in Hood River sailing almost every day. I have competed professionally for the past 6 years and have been climbing the ranks with every event. In the summer I travel up and down the west coast to give clinics and demos for my sponsors. In the summers I produce, film and edit Jake "The Snake's" Video Nights that are hosted at The Copper Salmon in Hood River. My production company, Snake Bite Productions, also produced the 2007 Ezzy Rigging Video, a web production for Windsurfing Magazine and co-produced Wave Sailing Secrets Revealed.