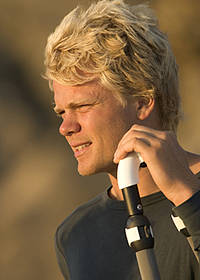 Favourite music: Krush, Shadow, Mos Def, and related
Favourite food: Just like films – nothing overcharged with ingredients: The minimum amount of the right participating elements will leave the strongest impression on most of the audience. Just like in films the old masters are Japanese, Italian and French.
Hobbies: Films, Piano
Philosophy of life: If you're trying to find the all-explaining philosophy about life you're missing what life is all about
Short CV / resume: My parents taught me how to windsurf when I was 7. First sponsor when I was twelve. Got into competitions early but didn't like it, instead took every chance to wavesail. When I was 16 I worked in the German Neil Pryde warehouse to earn money so I could travel. At that time I got supported by the German worldcuppers, Ingo Meyer and Andy Laufer a lot. They let me visit them in Barbados and South Africa when I had school vacation. Then Jason Prior invited me to stay at his place in Maui. Thanks to him I spent six months in Maui when I was 17. Went back to Germany to pass my abitur when I was 20. Then joined the Worldcup. Lost focus in competition a little bit recently, since my interest in films.

Most emotional moments in sports: First Aerial at Hookipa all by myself during a late night session. When I came in 2nd at the Kind Of The Lake. The whole contest just flew by. I passed through the heats doing what I was always did at that spot. A couple of hours later I was on the podium surrounded by the yelling crowd.

Genie gives you one wish – what is it: I'd wish I didn't have that wish.

What other sports do you respect: Skateboarding, Snowboarding, Surfing