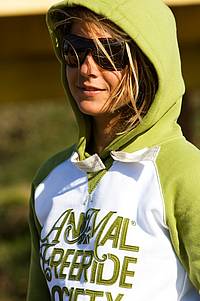 Favourite spot: There are lots of spots I like a lot, in Gran Canaria there are really good ones for different kind of conditions, each one very different but quite good each... but if I have to choose one of all, I choose a good waveriding session in el Faro de Maspalomas...

How I started:I had a friend in Highschool that lived in Arinaga, next to Pozo, I went with him for having a beach day and try windsurfing with his equipment. Since then, I knew I wanted that in my life... soon when I started university I did it more often...

Best windsurfing day in my life:At home in Vargas with 3,7 and logo high waves finishing the session late in the evening alone already in the water, with very low tide and nearly too tired to drive back home....heaven!

My Goals:To do better in the waves

My Slogan:Go for my dreams....