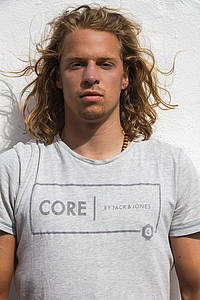 The first time I stood on a board was in 2000. As soon I starded freestyling
Since then I'm fully addicted to this sport and I'm practicing as much as possible.
I used to live at the lake of Biel where I was training while I went to School. Since 2012 I'm switching between Windsurfing, playing music and working temporary in Switzerland.
Unfortunately I had my first big windsurfing accident in 2016 before the last event of the year which took more than a half year to completely recover.