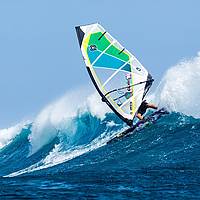 loving windsurfing since the age of 10, travelling in Europe, and then all around the world. I used to live in Dominican Republic, Cabarete. Then back in France, editor at « Wind Magazine », in charge of all the tests, and I used to travel everywhere possible (Cabo Verde and Tarifa were my main test bases at this time, but also south of France and Hawaii). First world cup event (wave) in Puerto Rico at Shacks in 1992. Then Ia lot of contests : Cabarete classic, Cabo Verde Masters, Aruba Hi-Winds, Sylt, Guincho, Almanarre, Paris Bercy Indoor, Windsurf Trilogy in Morocco, Puerto San Carlos Baja California, Mexico…). In 2006, I returned to my other passion, aeronautics (former student fighter pilot in the french air force at the age of 20), to become an airline transport pilot. I managed to arrive in 2011 in New Caledonia, where I began to work for a local airline, Air Loyauté, flying on Beech 200 (hospital and on demand flights). Still full motivated by windsurfing, wavesailing is really my favorite discipline, but back into slalom addiction as the Noumea's local scene is simply amazing, in terms of spots and wind conditions, and also in terms of competitors (from the most famous Robert Teriitehau till the new local young kids, the « tank" is full of insane talents with high level here in New Caledonia).