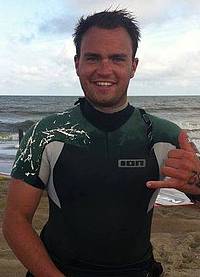 I starded windsurfing on the age of 7. After a few years I went with my dad to the Dutch Championships and saw all the big guys racing. From that moment I knew: I want to race to! I did my first competition when I was 13 years old. From that moment I was addicted with racing in competition in Formula and Slalom. Most of the races I did was Thijs van der Meer the judge.
In all the years after that when I was competing my best results where:
6 times 2nd youth in Dutch Championships. (all the times behind Jordy Vonk)
2nd on the European Youth Formula Championships 2012
7nd on the World Youth Championships 2012
7nd World Youth Slalom championship 2012
The last 2 years I ended also on the place 7 during the Dutch Slalom Championships. I could fininsh higher but in both seasons I had an injury during the first half f those seasons. Thats also why I do not have any international results over the last 2 years but i'm fully recoverd and faster than ever.

Now I want to take the step to the highest level in windsurfing. Last year Jordy Vonk and Thijs van der Meer where already pushing me to join but I felt that I was not ready for the step. Last winter I joined Jordy Vonk to Tenerife to train 5 weeks in a row with all the other PWA guys training there. I improved my own level and i think I am ready for it!