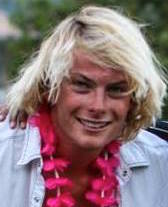 My parents co-own the windsurf business Club Vass. I grew up in this environment and learnt to windsurf from a very early age, I think I was about 2 ½ for my first go on a Mini Bic. For the rest of the year we lived in Sydney Australia so I enjoyed an endless summer lifestyle. Through my teenage years I was especially lucky to have the Club Vass boys as mentors including PWA sailors Andy Chambers and Max Rowe. I became a Windsurfing instructor at 16 and once I finished high school in Australia 3 years ago I have travelled the world either teaching windsurfing or developing my own skills. I based myself at Club Vass where I am an (RYA) Advanced Instructor, and have trained during the winter in meccas such as Jericoacoara Brazil, Dahab Egypt, and Cape Town South Africa.