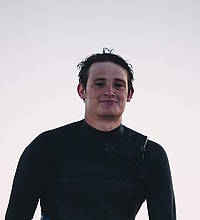 I am 19 years old and started windsurfing on a small lake in the Netherlands ten years ago. My parents were enthusiastic windsurfers so they teached me all the basic stuff. Right from the beginning on I got really addicted to windsurfing. We always went to Holland for the weekends (Brouwersdam, Hindeloopen, Makkum...) and sometimes we even went after school although the nearest spot from my home was two hours away.
In spring 2010 we flew to Bonaire. This was the time where I first saw freestyle windsurfing. Kiri, Tonky, Taty showed for my brain unimaginable moves. It seemed to me that windsurfing does not have any limitations and besides that it looked amazing. After Bonaire I really wanted to start with freestyle so my parents bought me a freestyle board at Christmas 2010. I learned fast and I wanted to get as good as possible. I studied a lot of windsurfing videos on Youtube in order to learn from them. In 2011 I saw a video of the Young Guns Camp on Rhodes. I was fascinated of the idea of the camp so I registered myself for the camp in summer 2011. I liked the camp because of the atmosphere, the many young people and the chance of getting tips by professional windsurfers. This helped me a lot so I participated three more times at the camp. In 2013 and in 2014 I was able to win the competition in the camp. In autumn 2015 I wanted to compete in the Efpt at the Brouwersdam but unfortunately I was not able to participate because of a strong illness. In early summer 2016 I made my Abitur and participated at the PWA worldcup on Fuerteventura. It was an amazing experience that I don't want to miss this year! I got 33rd but I almost kicked out some guys! This year it will work! ;-)
After Fuerteventura I moved from Duisburg to Kiel (directly at the Baltic Sea) for studying (and of course for windsufing!). Now I have the opportunity to windsurf whenever it is windy. It is new experience for me that I enjoy every day. Over the last months I have competed at some German Freestyle Battle Events with succes
2011-2014: Young Guns Camp
2016: German Freestyle Battles in Südstrand (Fehmarn): 9. place
PWA Worldcup Fuerteventura: 33. place
German Freestyle Battles in Orth (Fehmarn): 4. place
2017: German Freestyle Battles in Südstrand (Fehmarn) (TOW-IN): 4. place