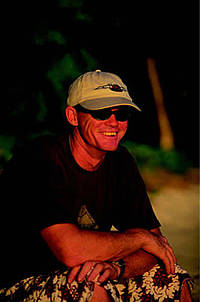 September 25th, 2008:-
Iconic Aussie wave sailor, Scott McKercher has announced his retirement from PWA competition. Famed for his super-smooth surf-style wave riding, McKercher leaves the tour having etched his name in the history books, as one of the highly regarded elite that have been crowned the World Wave Champion.

Scotty: "After much deliberation it is time for me to take a side step away from PWA competition.

For the last couple of years I've been struggling with an injury which was a bit of a mystery, but was getting progressively worse. Walking has been pretty painful, and some of the more intense moves usually ended up as a groin strain, or intense pain around the buttock.

Over the summer in WA it was diagnosed as advanced osteoarthritis of the hip with bone spur growth, meaning basically there is no cartilage left and am pretty much in need of a replacement (I have the hip of a 70 year old as a result of having way too much fun in one lifetime!). I suppose the nick name "gramps" has come to fruition.

That along with time restraints due to new boards being tested, has me missing Sylt for the 1st time in 16 years.
I competed in Cabo Verde after a steroid injection which worked out ok with no jumping, but the shot just before the canaries provided little relief for the stresses of Pozo.

And the level the boys are taking jumping to these days was making it impossible to keep up with what they're doing in the air.

Although I'm happy to be in the desert northwest of Australia currently testing wave boards,(See attached photo's of last weekend) there's a big part of me that still wishes to be in Sylt, as a lot of the competitors are like my extended family and will be missing the good times that we have there every year.

I'm still hoping to be allowed entry into the contests like Cabo Verde or if a quality wave venue pops onto the tour,(Maybe I can do something towards that) but as for full time PWA competitor, the writing is on the wall, and it's pretty much time to hang up my contest vest.

But it's far from retirement as I love windsurfing way to much for that and am going to be devoting more time now towards developing wave boards, stand up paddle boards, as well as traveling to the waves I've yet to make it to around the place.

It's been a fortunate life and I have a great deal to thank the PWA for in providing me the opportunity to live this life.