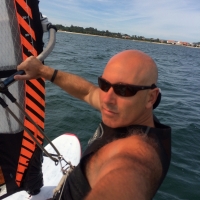 In the context of competitive windsurfing I started my sailing experience in the Formula Windsurfing Class. I won some championships in Spain and I become the Secretary of the Royal Spanish Sailing Federation (RFEV) for the Formula Windsurfing Class, organizing some Spanish Windsurfing National Championships.
In 2015 I focused to Slalom. The first slalom event in which I participated was the 2016 ISAF-IFCA Slalom European Championships and I ranked 18 in masters. In 2017 I entered the first PWA event (Catalunya-Costa Brava PWA World Cup). Thanks to everything I have learned on such PWA event I climbed to the 5th place on masters on the 2017 ISAF-IFCA Slalom European Championships (of course taking 1st place on such event the current PWA world champion!).
At present I am the 1st overall among the Spanish Slalom sailors in the current Official ISAF-IFCA Slalom World Ranking (certified information available at the ISAF-IFCA website).
For the 2018 PWA World Tour I got as sponsors LoftSails, RRD, Unifiber, GasoilFins, Bellini Surf Shop and KiteboardinGalicia,