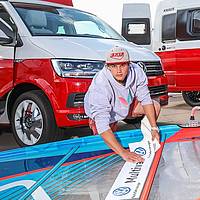 I started my Windsurfcareer with the age of 14. Since then I´m giving my best to improve all the newstyle Freestyle moves as best as I can.
I already start competing 2 years later. My first Event was 2009, i called the European Freestyle Pro Kids Tour. This event was running in the Netherlands specially Brouwersdam. At my first event there i could make it at the 9th place in my age class.
Just 1 year later 2010 I travelled with my friends to the next EFPKT event in Alacati Turkey. This event was already running better for myself! I could make it to the 5th place overall.
Then I start travelling just to windsurf. My first journey has been on Fuerteventura! Where also the PWA has been at the same time!
Since then i knowed that my goal is to compete in some years at one of the PWA Events. With the age of 17 , so 2012, i start competing in the whole German Freestyle Battle Tour. (Its like the German championships just for freestyle) Already 2014 i could made it on the 5th place at the GFB in Pelzerhaken!
But also in 2014 I was competing at the EFPT in Six Fours, France.
2015 I start travelling for 8 month.My first place to be has been Brazil. After i stayed there 3 month I went to Australia. And directly from Australia 2016, I went to Fuerteventura to watch the World Cup and improve myself!
This year 2017, I competed at the German Championships on Sylt. After a really hard competetion, while we had onshore Wind, I could made it on the 5th Place overall from 30 riders!

Thats why my windsurfing ambitions are to compete this year on the PWA Event on Sylt and hopefully the next completly next Tour. I just wanna give my best to compete against International riders!
But not just because of the competetion I wanna be there! I mean, where could be a better place then to stay 1 week with all the friends and guys who love the same sport and share the same emotions for windsurfing. I wanna improve my moves and learn more then I already know. And to compete is the best way to do it.