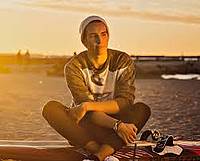 “I started windsurfing at the age of 9. I was on a vacation in Dahab, Egypt with my dad when we saw some windsurfers blasting over the water, and at the time it seemed extremely cool – so we decided to take a course as well.
Since then I was blown away by the adrenalin on the water and decided to join a windsurfing-school as soon as I arrived home. At the age of 11 I took part in my first competition, but unfortunately didn’t finish any races.
The year after, I started competing at Formula class since I was too big and heavy for Techno.
The first few years I didn’t do so well because I was also a bit heavy for Formula in light winds, but when I was finally allowed to use 11m2 sail, my results started to improve and in 2014 I managed to win Formula U-20 Estonian Champion title at the age of 16.
In 2015 I won the Formula Youth European and World Championships.
2016 I spent few weeks of the winter in Tenerife where I participated in the TWS Pro Slalom trainings.
I was so amazed how fast the top slalom guys were, so I decided to focus on slalom from then on and develop my experience and skill day by day to compete at the highest level. Both, 2017 and 2018 winters i was training with PWA riders in Lanzarote Pro Slalom camp and this winter i was actually already very competitive against very fast PWA guys.
I'm 197cm tall and i weigh 93kg. I believe i have all the necessary physical basics to be successful on the World Tour and it's a matter of gaining competition experience and training hard.
Riders i raced with and against in Lanzarote are Kurosh Kiani, Andrea Cucchi, Basile Jaquin, Garbiel Browne, Bruno Martini, Nicolas Goyard, Valentin Brault. In 2017 i managed to finish Estonian Slalom Championships in third place overall despite i had to miss one event due to participating in IFCA Slalom Europeans. I was actually quite happy with this result as i managed to win the last event of the season by winning 5 races out of 6.
IFCA Slalom Europeans was quite disappointing for me as due to lack of wind only one elimination was held and i made a false start in the semifinals. But i'm more motivated than ever to compete as much as a i can and build my skill and experience.
2018 I finished Formula Windsurfing European Championships 5th overall and 2nd in senior category.

Windsurfing Ambitions: This year (2018) I want to compete in PWA Portugal and Sylt slalom events aswell as IFCA Grand Prix events in Italy and Croatia. Also i plan to compete at IFCA Worlds in Hvide Sande.
My goal is to become a full time professional windsurfer. I will do 2-4 IFCA events and hopefully 2-4 PWA events in both, 2018 and 2019. After finishing my studies at the University i'm determined to become a full time professional windsurfer and compete at PWA Slalom Tour for the full season at the highest level.