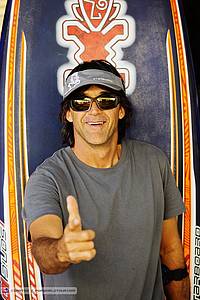 Jimmy Diaz follows in the footsteps of former chairman Phil McGain, who has held the position for twelve years.

Newly elected chairman Jimmy Diaz has been windsurfing since the age of twelve and competed in his first professional event four years later. While getting his university degree in electrical engineering, Diaz competed in the 1992 Olympics for the Virgin Islands. After university Diaz returned to his passion for racing and has been competing on the PWA tour ever since. Diaz has been very involved in the development process at several windsurfing companies, most currently as head of development at a major sail brand. Having seen the PWA go through a fair amount of changes as a competitor Diaz is now eager to contribute to its existence and success in his new role as PWA chairman; “I believe these are very exciting times for the PWA. There is a lot of energy and thought being put into developing a stronger, healthier tour which will help in the growth and promotion of our great sport on all levels. I look forward to working together with the media, event organizers, and other associations to bring about the necessary changes to accomplish this. I would like to thank Phil McGain for his undying dedication to the sport and the many years he invested for the good of the PWA and windsurfing in general.”