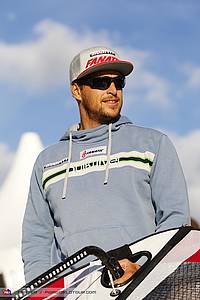 BIOGRAPHY Born in Purmerend near Amsterdam on 22nd May 1975, Peter started windsurfing in the late 80’s. With the full support of his parents, he was able to pursue his passion for the sport and complete his economic studies. Such was his determination, that despite having to do the mandatory 7 months national service in the Dutch Armed Forces, Volwater still managed to sail and travel with a special sports arrangement. It was no surprise that straight after leaving the army, he turned professional in 1996. Immediately it was clear that Volwater had the skills to compete in all disciplines, winning numerous titles right from the start of his career. However, more recently he has decided to dedicate his time solely towards the wave and slalom contests. Volwater is now a constant traveller, who home is where his harness is. He often enjoys top locations like Australia, South Africa and his homeland, Holland. And yes, occasionally he can be seen on that little island in the Pacific, Maui
PRESENT Volwater is renowned for his excellence in extreme conditions, where his sturdy 92 Kg’s generates a strong physical presence. Match that with his tremendous attitude and he really stands out on the water. Using incredibly dynamic and charging moves, he over-powers opponents through sheer guts and determination. This live it hard and fast manner ensures that he constantly strives for the toughest and most radical moves. It will come as no surprise to hear that his favourite is the double loop. A move that requires the fullest of commitment, technique and all or nothing approach - he regularly makes them!
Favourite manoeuvre: double loops