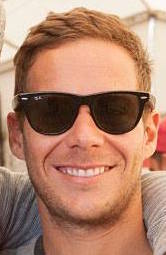 1st PWA event Leucate Freestyle Qualifier 2003
Eric is studying 1st of Secondary. He speaks very well English, Catalan and Spanish.
His hobbies are body board, mountanbike, snowboard, skateboard, hockey rollers and swimming.
He has participate in local events since he was 11 years old (1997) getting in his first raceboard Pals Beach to Medes Islands (Costa Brava) the 9 overall position of 20 sailors, being the record of the youngest boy sailing in this event along the 15 years.
In 1998 (12 years old) he ranked #7 position in the same race board.
In 1999 (13 years) he ranked #8.
The summer of 2000 he ranked 2nd place overall (14 years) of 23 sailors.
In 2001, the XIX Race Pals Beach - Medes Islands, ranked 3# of 21 sailors.
In 2002 he ranked 4# at the Surf Alegre (PWA Costa Brava) he also can contact with different sailors of the PWA like Kauli Seadi, Tonki Frans, Josh Stone, Néstor Parrés and another young sailor of Hawaii.
In 2003, Eric has participated in Leucate Freestyle. This is his first event in PWA. It was a pity but we didn’t have any day with wind. But they played an expression session with the other competitors.
In August 2002, Eric has participated in the 1st Windsurfing Camp in Pozo Izquierdo during 20 days, organized by Cutre under the direction of the sailor of PWA Juan Enrique Ureña and Victor Fernandez. They can give you information about Eric's sailing level (19 days sailing with 30 to 45 knouts, sails