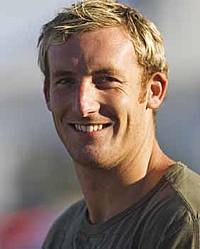 I started my first year on the British Professional circuit in the year 2000 going straight into the top 5. I might have finished higher but I missed 3 of British events due to competing in international events such as the North Sea Cup, the European Formula championships in Spain, the Under 22s World Formula Championships Spain, the Fuerteventura PWA Grand Slam, and in December I attended the World Formula Championships in Thailand.

I have set up my Web Site to increase my publicity and that of my sponsors and also to increase my profile within both national and international organizations, included within this is a technique section with video clips which is proving very popular, from which there has already been a lot of interest and communication generated by the site.