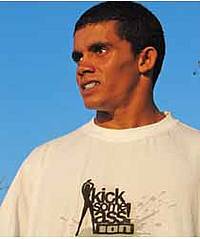 I have a received a huge opportunity for this year – 2008 – to be sponsored by North Sails. This is a dream come true. I had this dream for a long time, but did not have the opportunity to fulfill my dream for lack of sponsors. Today, I have the same goal to make the World Cup in Windsurfing, but with sponsorship, I also have the possibility. I would like to thank North Sails and Fanatic Boards and ION for helping me take one step closer to achieving a dream. My goal is to be amongst the top ten in the world.